This biography of Yoon Han Bong is based on the work of writer Ahn Jae-sung.[주 1] It has been translated a condensed version into English to reach US-born Korean Americans and allies in the movement.[주 2]

The 1970's had some notable dictators - Pahlavi in Iran, Marcos in the Philippines, and Pinochet in Chile. In this "club" of third-world dictators supported by the U.S., there was Park Chung-hee, who seized power over Korea through a military coup d'état in 1961 and ruled for 18 years.

Park Chung-hee after his 1961 Coup d'état

Park and his military group used the possibility of war with North Korea as an excuse to trample the rights of citizens. They made military training mandatory for students in schools. Children had to sing praises for Park, with songs such as "Our President, Our Competent President." Policemen monitored the smallest and most personal choices – for example, they walked around measuring the hair lengths of male students and the skirt lengths of female students. At 5 p.m. every day, people had to stop what they were doing to face and salute the flag. In the movie theaters, everyone was required to stand when the national anthem played.

In April of 1974, Park arrested over a thousand students who were critical of his regime. This arrest occurred without a warrant. Students who had gave impassioned speeches for democracy in bars near campus were branded as members of the National Federation of Democratic Youths and Students, regardless of whether or not the students had even heard of such an organization. For this "crime" Park had 180 of these students tortured and jailed, and many were given heavy sentences of over 10 years.

Park and his stooges did not stop there. They claimed that the National Federation of Democratic Youths and Students was controlled by anti-establishment radicals. They coerced false confessions from eight students: Do Yejong, Yeo Jeongnam, Kim Yongwon, Lee Subyeong, Ha Jaewan, Seo Dowon, Song Sangjin, and Woo Hongseon. They were forced to claim that they were a part of the People's Revolutionary Party, a party with strong communist ties. The Supreme Court sentenced them to death on April 8, 1974. Within 18 hours of the sentence, they were executed. The country was in shock. A student of Seoul University, Kim Sang-jin, protested the injustice by disemboweling himself.

In theory, the constitution protected the rights of workers – workers were free to hold assembly and take action together. But these rights were not protected in reality. In 1970, a young laborer protested his working conditions by pouring paint thinner on himself, causing severe chemical burns. After the Yushin Constitution was implemented in 1972, the working conditions of laborers in Korea were straight out of Dante's Inferno.

Whenever workers tried to assemble to protest against their inhumane work hours and low wages, the police arrested them and tortured them. They demanded to know which "intellectual" was leading the rabble-rousing. These intellectuals were sent to prison for the crime of "interfering." Factories were free to treat workers like disposable livestock.

Despite the brutal oppression, students continued to protest against the regime. In 1979, more than a thousand protestors were jailed. All the jails in the country – about 30 in total – were packed full of students. At this point, even the American government could not endorse Park's tyranny. Jimmy Carter visited Korea and urged Park to release the students in jail.

But it was not the protests that ended Park's rule. On October 26, 1979, Park attended a party with his most trusted confidante, Kim Jae-gyu. Kim shot Park, who died instantly.

Korea celebrated Park's death. Protestors swept through the streets the next May, celebrating "Seoul's Spring." Unfortunately, the "spring" was cut short. Chun Doo-hwan, the military general, had been looking for a chance to seize power. At midnight of May 17, 1980, Chun and his military group imposed emergency martial law. It was a declaration of war against the people. Now Chun was free to arrest and imprison anyone he wanted, ignoring the judicial process.

Gwangju was a special city. During the Japanese occupation, the students of Gwangju had led one of the most important large-scale movements for independence – the Gwangju Student Independence Movement. Gwangju was also the city to most actively condemn Park's dictatorship. When the hopes for democracy were extinguished by Chun's military dictatorship, when other areas fell silently into hopelessness, the chanting of "Out with the tyrant!" could still be heard in Gwangju.

It was Gwangju that raised the protagonist of this story – Yoon Han-bong. He had been a student when Park declared the Yushin Constitution, in October, 1972. The Yushin Constitution violated the basic rights of citizens and increased the president's power immensely. It also allowed Park to stay in power indefinitely, turning his presidency into a dictatorship. It was at this point that Yoon Han-bong began his career as an activist. When, eight years later, Chun seized power in May of 1980, it was Yoon Han-bong who headed the struggle against him.

Chun was determined to trample out any resistance. The soldiers who were sent to Gwangju fired on unarmed demonstrators as well as random civilians. Yoon had to escape Gwangju – had he been arrested, there was no doubt he would have been executed. Yoon knew that the way to continue fighting against the tyrant was to move to a different country. He plotted every detail of his escape with painstaking care. Smuggling oneself out of the country by ship was risky business – if the sailors found out, it was common practice for them to throw the stowaway straight into the ocean.

Yoon was not well known or well connected. He was just a nameless young man, an exile who received no support. He went from one city to another in worn out sneakers, carrying nothing but a small bag of personal belongings. He had been a country boy in Korea, and he remained a country boy in America – just an exiled one. And yet he managed to found a Korean youth organization of national scale in America, comprised of the many Korean immigrants who still cared deeply about what was happening in their home country. 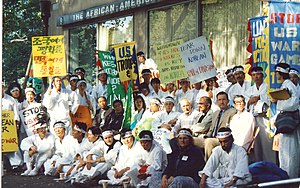 This organization eventually founded branches in Canada, Australia, and Europe. Yoon and his comrades collected 110,000 signatures to support the denuclearization of Korea. They then went on to organize a peace march from Baekdoo Mountain to the DMZ and from New York to Washington D.C. to promote their cause. But despite all that Yoon had done with so few resources, he was not one to boast. When he returned home in 1993, after 12 years of exile, reporters asked him for a statement at the airport. He told them he was merely a fugitive, a shameful fugitive.

Yoon passed away on June 27, 2007. His friends agreed to write a biography of his tumultuous life, but no one took up the task for nine years. Who among us could adequately describe the slaughter of May 20, 1980? Who could convey the shame of the protestors who fled? Who understood the guilt of the refugee who survived?

In 1975, I met Yoon for the first time. He was bony – his ribs were showing. He had alarmingly few possessions. When he died, I spent five years retracing his steps, trying to untangle the legacy he had left us.

This English language biography of Yoon Han Bong is based on the work of writer Ahn Jae-sung.[주 3] I have translated a condensed version into English so that it may reach my dear Korean Americans.

Here we must thank those who participated in the creation of Yoon Han-bong's English biography.

We believed it was important and necessary to raise awareness about Yoon Han-bong among second-generation Korean-Americans and non-Korean brothers and sisters, but this was not a simple task.

Writers who are skilled in one language are bound to be clumsy in another. As we begun the task of translation, this limitation seemed to present an insurmountable challenge.

This book was completed through the dedication of Korean-Americans; Michelle Jae Eun Chang, Albert H. Pak, Clara Choi, Eugene Kim, SaeHee Chun, Cliff Lee and Hyun-Woo Kang Their comments and suggestions were indispensable to the final product. We express our gratitude to them for their participation in this process.

Born in 1958 in Gwangju, Hwang Gwang-woo was expelled from high school for leading an anti-dictatorship protest. After passing the college admissions examination, he entered Seoul National University in 1977, where he spent his time reading classics. He was sentenced to two years in prison during a military trial in 1978 for participating in a protest jointly organized by six universities in Seoul, but he was granted parole the following year. During the "Spring of Seoul" in 1980, Hwang was expelled for violation of martial law while serving as the head of the Social Bureau in the Student Council of Seoul National University. In 1983, he ran free night classes for working and underprivileged youths and established the People's Church in the Sillim-dong district of Seoul and. The next year, he became a laborer at the Gyeongdong Industrial Co. He was also the head of the Education Bureau in the Incheon Area Workers ' League.

Hwang published several books during the military dictatorship under the penname "Jeong-in." These books – In Search of the Roots of Alienated Lives, Hearken to the Cry of History, and Those Who Bear Rafts - provided guidance to those who were concerned with the state of Korean society, and gathered much public attention. In 1991, he founded a monthly magazine, Those in Search of a Path, and since then has authored numerous books including Truth Is My Light, The Reds: A New Reading of the Communist Manifesto, and Philosophy Concert. Let the youth remain there for long, The Biography of Socrates: Love, The Shrine of Philosophy, and History Concert.

After his belated graduation from the Department of Economics at Seoul National University in 1998, he served as the Director of Political Education of the Korean Democratic Labor Party. In 2009, he entered the Department of Philosophy at Cheonnam National University to study philosophy. He now reads classics with teachers, housewives and students at the Classics Institute in Gwangju.

Albert H. Pak: This was a very rewarding experience. I was reminded how many of the freedoms in Korea were won through the heart and mettle of its citizens. The book provides a very behind-the-scenes look at how things happened on the ground, a perspective that is important in truly recognizing the heroes of history.

Albert H. Pak was born in the US, currently studying at the University of Pennsylvania Law School and Princeton University Woodrow Wilson School of Public Administration for their Joint Degree (JD & MPA).

Jae Eun Michelle Chang: Thank you again for giving me the opportunity to be a part of reviewing the book. I learned a lot from the few chapters that I was given, and it led me to look more into Yoon Han-bong during my personal time. I enjoyed reading them and I especially enjoyed reading the small details about Yoon, such as descriptions of his personality, examples of things he would say, and the small anecdotes that made the book more fun to read. I look forward to reading the entire biography when the book comes out and learning more about Yoon. It is great to learn and read about a Korean activist that I may not have learned about otherwise.

Jae Eun Michelle Chang is a second generation Korean-American. She got her MPH (master of public health) degree from Columbia University's Mailman School of Public Health, and now working for the New York City Department of Health and Mental Hygiene.

Clara Choi: I enjoyed reading about his life and learning about such a passionate time in Korean history. It was my honor to be a part of making the biography of Yoon Han-bong who made a significant contribution to democratization of Korea.