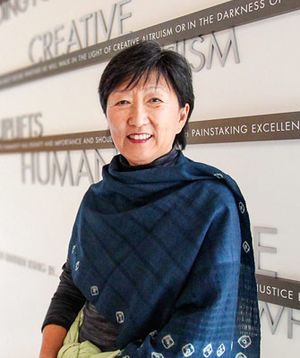 Angela Oh is an attorney, teacher, and public lecturer best known for her role as spokesperson for the Korean American community after the 1992 Los Angeles civil unrest and her appointment on President Bill Clinton’s One America Initiative. Ms. Oh is a graduate of University of California, Los Angeles, where she earned her Bachelor of Arts and Masters in Public Health degrees. Her Juris Doctor (J.D.) is from the University of California, Davis School of Law (King Hall).

In 1992, Angela Oh was partner in Oh and Barrera, LLP for a decade and had developed a state and federal criminal defense practice, including representation of juvenile offenders. In her practice, she defended many Korean clients and therefore was well known and trusted in the Korean community. As a result of the chaos of the 1992 Civil Unrest in Los Angeles, Angela Oh emerged an eloquent spokeswoman for the plight of the inner-city Korean American merchants, who were targets of the violence and destruction. She pointedly articulated the frustration of her fellows Korean Americans and the fears of merchants who took up arms to protect themselves when police did not respond to their calls for help. She was quoted locally, nationally and internationally in newspapers and TV reports because she was among a small group of English-speaking, second-generation Korean Americans able to express the views of the largely Korean-speaking, first-generation business owners.

In June 1997, she was appointed by President Bill Clinton to the President's Initiative on Race. She served as part of a seven-member Advisory Board to the President in an effort directed at examining how race, racism, and racial differences have affected the United States.

Oh was the Chair of U.S. Senator Barbara Boxer’s Federal Judicial Nominations Committee for two years, she was a Lawyer Delegate to the Ninth Circuit Judicial Conference, and served as a member of the Federal Magistrate Judge Selection Panel in the Central District of California, for three years.

Between 1998 and 2002, Oh left the full-time practice of law to study, teach, and write. Her speeches and writings reflect the opportunities and challenges that diversity presents. Ms. Oh’s lectures have taken her into both national and international arenas, including China, Korea, the Middle East, Northern Ireland, and the United Kingdom.

Today, she is an attorney mediator at the California Department of Fair Employment and Housing. She also works with her partner, the artist Tu-2, on a project that uses fine arts as a means to teach Zen meditation. They work in schools and with courts that have alternative sentencing programs, and they work with a nonprofit that serves adults who are newly emancipated from the foster care system.