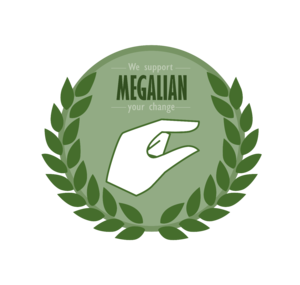 Megalia is a feminist trend that rose to prominence in the Korean speaking internet in 2015. It marked an era where feminist discourse online adopted an unapologetic, proud ethos and exposed misogynistic practices in interpersonal relationships and the media; exposed sex crimes that had a tendency to be ignored; promoted a socially critical meme trend that came to be known as mirroring; and often became the first exposure of feminism to the general public.

Megalia's surge stirred debates that ranged from positive admiration to controversies and negative backlash. Men in Korea felt so threatened by Megalia's rise and its combative tone, that they engaged in a systematic smearing campaign against Megalia, and used the label "Magelia user" to suppress the slightest hint of feminism across social spaces and public and private institutions. Megalia as the original bulletin board and website no longer exists - but its impact is still discussed in feminism, women's studies, and online communities today, and online activists carry its spirit in online and offline spaces across Korea.

As internet usage spread in Korea, hate speech and misogyny rose in online spaces. This led to a widespread gender divide of these spaces, where women users would primarily gather around specific websites, leaving other sites to be transited primarily by men. Some sites put various enforcement and protective measures to ensure only women would be able to read and write in their websites. These women-dominant spaces started to question hate speech and discrimination against women.

The same year, a health and public policy crisis sparked by the MERS epidemic in Korea, which exposed bare some of the dominant misogynistic social framing against women, created the conditions for the formation of Megalia.

For context, it is helpful to understand the online space in which Megalia's users first organized, which is DC Inside. DC Inside is a bulletin-board based Korean niche community site that developed a unique user subculture characterized by rough, straight talk, disregard for social hierarchy, and playful, sarcastic banter. Its gonzo ethos is welcomed by some as "breaking down the curtain of facetiousness" in search of true humanity, while many consider its raw style to be too much. Any long time internet user can immediately spot a DC user when they write comments on the internet, because of its unique style. At the same time, "straight talk" inside the patriarchal, misogynistic Korean society meant rampant and widespread hate speech against women, immigrants, and third world countries. DC Inside later gave birth to ILBE, an extreme right wing subgroup that became a major social issue in Korea.

DC Inside is divided into thousands of topic-based user subgroups, called galleries. Each gallery gets its own bulletin board, its own team of moderators, and often develops its own subculture. Some galleries grow to become much more popular than others. While DC Inside's user base was mostly male, there were segments of women users, and the gallery "TV Male Celebrities Gallery" (남연갤; TMCG) was one place made up mostly of women users. Being surrounded by hate speech across the site, TMCG started experimenting with reversing and parodying hate speech. poking fun at misogyny, in a way that was representative of the DC Inside culture. The origins of mirroring, a powerful tool to be evangelized by Megalia later on, could be said to have been born inside TMCG.

When the MERS respiratory virus epidemic hit Korea in May of 2015, there was widespread panic among the population. People were worried about the deadly virus, and frantically tried to find information online, asked questions, discussed personal prevention and protection measures. One of the topics that garnered public attention were Koreans who traveled to impacted countries,[주 3] contracted the virus, and returned to Korea. There was a generalized witch hunt and a lot of blaming against these travelers, whose action was deemed irresponsible. However, the public and the media was only reacting to women travelers, and not to men travelers - especially in online spaces, users would relate to men's stories and try to rationalize their choices. "Oh wow, look at him, he had to travel for business to support his family and contracted the deadly disease - that's tough man", people typed in comments. Whereas for women travelers, it was common for commenters to things to the extent of "Look at that Kimchi bitch, going on expensive shopping trips wasting money in Hongkong when there is a MERS outbreak. Now thanks to her we are all screwed."[주 4]

Women users of the TCMG Gallery were the first to point out this contradiction, and engaged in a vigorous debate and fight with other users to counter the ongoing narrative. As the MERS epidemic garnered national attention, administrators of the DC Inside website created a dedicated subgroup gallery just for MERS topics - the MERS Gallery. TCMG users jumped ship to the MERS Gallery and called on for support from other women-dominant sites to help outnumber the opposition.[주 5] Often times in Korean bulletin board sites, and in DC Inside in particular, groups engage in a battle of numbers - the side that succeeds at completely obliterating the other side by the sheer force of posts, which by their title indicate support for one argument or another, is considered the "winner" of the war; if the winning side comes from another gallery, they are said to have "conquered" the gallery.

During the following weeks, MERS gallery became a battleground between users with diametrically opposite views on a range of topics, and eventually the hate groups left MERS gallery. DC Inside's administrators also were cracking down on users who would satirize prevalent hate speech by replacing all women descriptors with male counterparts, while ignoring the original anti-women hate speech in the bulletin boards. 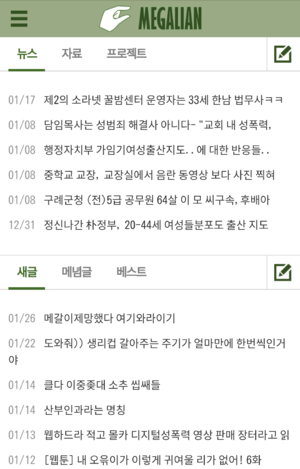 Megalia's website viewed on a mobile device in February 1, 2017.

Within a week of taking over the MERS Gallery, its users started calling themselves Megalia. The term was a triple word play - a juxtaposition between "MERS" and "Gall"[주 6] (메르스갤), and Egalia - drawing inspiration from Norwegian feminist author Gerd Brantenberg's book Egalia's daughters : a satire of the sexes, a satiric storytelling of an imaginary society in which men are given women's roles, and women take on men's roles. MERS Gallery users felt the story was representative of their aspirations and methodology, which was to awaken a feminist consciousness to users by showing the social construction of every gendered norm and belief in Korean society.

In response to DC Inside's discriminatory management, users started gathering in various online platforms, including Facebook. In August of 2015, women users of the MERS Gallery left DC Inside and created a completely independent website, megalian.com, that still maintained the bulletin board structure that people were used to.

Megalia's signature contribution to feminist practice was the popularization of mirroring as an act of cultural subversion. Mirroring is a two-part process. First, identify a piece of hate speech, reverse the genders, and then show the world the reversed hate speech - only then would society recognize and react to the mirrored hate speech. As the second step,

From time to time, Koreans borrow words from the English language, (sometimes from other languages as well) adopt it and re-contextualize it in a way that sometimes retains its original meaning, and sometimes does not. A classic example is "fighting" (화이팅), and more recently well-being (웰빙) and healing (힐링). Mirroring (미러링) was a neologism created by Megalia users to convey their new approach in a simple expression.

For too long, misogyny, patriarchal practices, and a patriarchal order and way of thinking had been deeply embedded into the society, to the point that a majority was blissfully ignorant