Zoom is a live conferencing service.

Zoom supports arranging multiple audio channels so that people speaking different languages may be able to join a single, unified call but hear the conversation in their own language.[주 1] Below are instructions and considerations specifically for running a meeting in English and Spanish. These instructions provide a more thorough scenario-specific walk-through than Zoom’s documentation.[주 2]

In a Zoom call with two languages enabled, there are three audio channels, or "audio rooms" - the Default Channel, English Channel, and Spanish Channel. Default is the audio channel participants join at first, before choosing a language.

The Zoom account hosting the call must be a paid Zoom Business, Education, Enterprise level account; or a Pro level account with the optional Webinar add-on. [주 3]

Before the meeting, the host must turn on language interpretation specifically for the meeting in the meeting scheduling option through Zoom’s website. This must be done every time a meeting with interpretation is run. This first activation cannot be done from within the Zoom program.

When turning on interpretation on the website, it is required to assign at least one interpreter. Assign, for example, your own email as a English-Spanish interpreter - it doesn’t matter who is pre-assigned, as this can be configured later, live during the meeting. If settings seem unclear, see Zoom’s instructions on how to enable interpretation.

There is a second activation. Once the meeting starts and the interpreter has joined the call, select Interpretation in the Zoom program and start typing up the interpreter's Zoom name - Zoom will show a drop-down choice of the user's full Zoom name which can be clicked. Assign them a language, click Start, and the interpretation function will be activated. This second activation can only be done by the host (the main host). Co-hosts do not have access to this function.

Once the second activation is done, if removing or adding interpreters, pull up the same menu again, and after making changes, be sure to press the "Update" button on the bottom left. Closing the window will simply cancel any changes without any warning.

Unlike participants, interpreters cannot speak into the Default Channel.

The host can assign themselves as an interpreter, and everything works normally as expected.

Everyone's Zoom client should be updated to the latest version to ensure the interpretation function is working smoothly.

Participants must take two additional steps upon joining the Zoom call - in the buttons bar, click “Interpretation” and select one language. They must also check the “Mute Original Audio” option in the same languages menu.

At any point, participants can hop into any of the three audio channels. (The "Off" option is the Default channel) 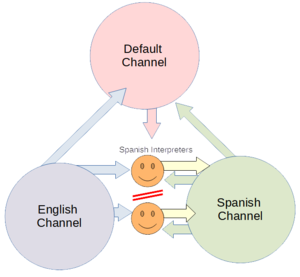 Once the meeting is set up following the above instructions (especially with the "Mute Original Audio" option), these are the audio sources that users in each role can hear. For purposes of accessing audio, hosts have no special role - they access audio in the same way as regular participants. Refer to the illustration to the right for a graphical overview.

Participants in the Spanish Channel

Participants in the Default Channel

If participants uncheck the "Mute Original Audio" option, they will hear all three audio channels, but not the interpreters who are talking into a channel that they are not in. So a participant in the Spanish channel without the mute option will hear English, Spanish, Default, and Spanish interpreter, but not the English interpreter. Therefore, during presentation, it is best that the "Mute Original Audio" option be turned on.

During a bilingual questions & answers portion, it will be best to turn interpretation off altogether. This is the only option that allows everyone to hear each other, including interpreters. During this portion, interpretation will need to be consecutive - wait for the speaker to finish talking before interpreting.

A second choice for the questions and answers section is to have everyone turn off the Mute Original Audio option. This allows participants in both language groups to be aware of when others are asking questions - even when they are in another audio room. However, a Spanish speaking person asking questions will not be able to hear the interpreter, who will be talking into the English room - so it will be a bit harder for the Spanish speaker to know whether the gap in silence is due to an interpretation that is lagging behind, or because the presenter is thinking of the answer, etc.

A third choice is to have Spanish speakers join the English channel. This also allows everyone to hear each other. The difference between the first and third choice is that turning interpretation off is something that can be done by the host once and will be applied to everyone, whereas the third (and second as well) require each participant to take an action.[주 4]

All three choices change the interpretation from simultaneous to consecutive - it means it will take much longer to conduct the conversation, given that everyone will be hearing the conversation twice. How will things work out if the Q&A portion is conducted using the same setup as the presentation? This is not impossible. It means that we would need interpretation in two directions. One interpreter could, in theory, do it, but it would be best to bring two interpreters, one for each language. Also, the fact that interpreters cannot hear each other is a problem in this situation. The flow of the conversation would be:

Unfortunately, there is nothing that allows people to see who is in which audio channel, or force people into audio channels from the host's end. Only individual participants can see their own audio channel - if they know where to look. The audio experience between the Default Channel and English Channel is very similar during presentation - both will hear only English audio, because the Spanish channel will be quiet. Since most things will seem to be working normally, even without selecting a language, depending on how a call is structured, this can cause confusion at some junctures within the call.